Sorry for the silence in recent days. As much as I’d love to be able to update this regularly, I haven’t been able to just yet. Today we’re on the road home from the in-laws’.  Do know that I’m working on some fun ideas and hope to post about those soon!

Also, I think I’ve solved my cheap incubator shell issue. I don’t have any spare ice chests or breadboxes sitting around (we live quite minimally, so we don’t have much
sitting around at all!), but we do have a few cardboard boxes and towels that were on their way out the door…which I’m going to rescue and repurpose! The boxes are two different sizes, so I’ll put the smaller one inside the bigger box with the towels providing insulation. Add an old laptop fan, a thermostat, a lamp kit, and a few other odds and ends and I should have a working incubator! Or if the insulation proves to be insufficient, at least it will be a fun practice run at the final incubator. Also, as long as I am not too clumsy I should be able to reuse all the important and expensive parts, shop no harm if it doesn’t work.

Finally, I’m typing this up on an app on my phone, so here’s hoping it works! Until next time.

The goal of this project is to incubate, brood, and raise a covey of healthy quail to maturity with the intent of consuming the produced eggs.  All aspects of this project will be completed in our small studio apartment, so smell and noise are the primary issues to address.  The project will also be under a strict budget to be decided before beginning, so the following will need to be decided:

Incubator Supplies
Little Giant and Hovabators cost only $44.99. This is close to what I’d like as far as quality, so that’s the extremely high end of my incubator budget.

Cheapo Spaceship Style incubator (AKA Chick Bator), which is immeasurably awful–and was my first incubator–is the cheapest incubator I could find without going DIY. The linked model is $19.95, so that is my goal.

Below are two DIY threads from backyardchickens.com, a great resource for anyone interested in raising fowl of any kind!  🙂  I’m including these as they are what I’m loosely building my own incubator around.

So this blog is primarily an excuse for me to learn about wordpress/blogging so that I can actually be useful when I help my Lady start hers up (we’re waiting until she has actual posts so that readers aren’t left out in the cold like they would be with my current, useless blog). This blog is going to be my playground…and probably pretty content-less, at that.

The Lady’s Intro to Falconry 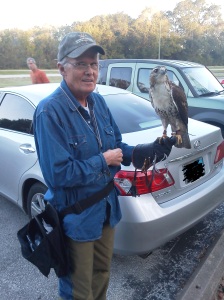 The following is from an email I sent to a friend regarding a recent Falconry hunting trip. This was my Lady’s first experience with Falconry, so I wanted it to be a good one…and it sorta was…

Before I get into the message I sent, let me set the stage first. Falconry is the sport of hunting with a Bird of Prey. In this instance we were hunting along with Chuck’s apprentice’s (Joe’s, that is) Red tailed Hawk, Rocky. We met Joe and Chuck at Denny’s that morning around 6:30, then went hunting shortly after. Chuck had a thing, so he didn’t stay out in the field with us for too long, just long enough to get us started (maybe an hour or two?). During that time Joe and Chuck attached a bell and a transmitter to Rocky, Rocky sat in a tree for a long time just chilling (“weathering,” as a falconer would say), a Cooper’s Hawk teased Rocky, and eventually we got to hunting.

Hunting invovled Chuck, Joe, and I grabbing sticks and tapping on the trees in the surrounding woods, trying to stir up some squirrels. However, these trees were heavy with fat green leaves, making it hard for the inexperienced hawk to see much even if we did kick up any squirrels.

OK, stage is set, here’s the message I sent to Chuck:

Wow, things never go quite as planned, eh?  Thanks so much for letting the Lady and I tag along today!  We really enjoyed it!  I’m sure Joe told you the whole story, so I thought I’d just add my version of what happened with a few pictures (in chronological order, even!).

After you took off, we continued to mess around near where you left us. Joe and I were beating brush, Rocky was following on, and the Lady was keeping a weather eye on that hawk (watching him like a hawk!  I bet nobody ever uses that idiom in this sport!). The Lady decided to head back to the car to check on our dogs, leaving Joe and I to the thrill of the hunt. Then, it happened. We heard Rocky’s bells signal movement. Thinking he was re-positioning, we both looked up to mark his progress through the foliage. Instead, that young hawk was quickly out of sight!  He was booking it like he had a hot date across town or something! He had flown directly across the creek, so Joe  started whistling and I headed off in the direction Rocky went…

So apparently the cover out here in Houston is thick as…well, I can’t think of a good enough example, so thick as a really thick thing!  I wasn’t doing any good, wasn’t hearing bells, nothing, so I went back to Joe and the Lady, who had heard bells back towards the car. They had come to find me, however, because guess who was carrying the telemetry receiver when he went barreling off into the woods oh-so-helpfully (oops). So I handed that over to Joe and got to learn how it works (very cool, btw). Signal strength was ok, but growing weaker, so we booked it back to the car, where we had a good strong signal. We thought that odd, but chalked it up to inexperience with the receiver (or at least I did). Into the car we piled.
Down the road a bit we jumped out, whistled, twirled the lure, and swung the receiver.  Another strong signal, still no bells, and general confusion from everybody.  I think at this point the Lady decided to stay with our dogs and keep an eye out in case Rocky tried to come looking for us where the car had been. Joe and I piled back into the car and went to the park entrance.  There we got a really weak signal. We then went across the road to the soccer field lot, where we got no signal…at this point, Joe decided to walk back, just following the signal and whistling/swinging the lure. The car was too restricted. He eventually ended up back in the park, heading towards the lot we met in. (This seems like a good point to note that when it is written out like this conclusion we should have drawn about Rocky’s location feels much more obvious, so just remember there is a plethora of details I can never hope to recall and Joe is merely an Apprentice and I’m not even there yet, so A + B didn’t quite equal C yet…) Just before the parking lot, I met him (after parking the car) and thought I heard bells, maybe muffled bells? And he was just commenting on the signal strength moving or acting weird.
And then I saw them.

Feathers. A whole pile of feathers in the taller grass of the ditch on the side of the road. Looked like a fresh kill, too. I edged closer, my heart plunking to the pit of my gut. Yup, I recognized hawk feathers alright. I’m not the greatest at hawk ID, so I weakly called out to Joe, asking if he thought these used to belong to a red tailed hawk? “Oh no!” I was fearing the worst of the worst. Something had happened, Rocky was now just a pile of feathers on the side of the road. Granted, they were banded…were his feathers banded that way? Hope kept trying to peek out, but no, the feathers spoke volumes… 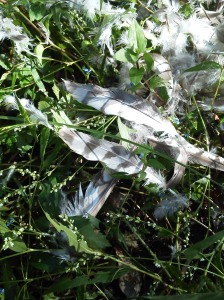 Bells. Definitely muffled, but also definitely bells. Coming from the thick mess of vines and thorns right in front of us. What, was it maybe a dog with the rest of the hawk? But the hawk may also just be hurt. There’s no way for us to tell from out there because it’s just too thick, so Joe decides to go in and find out. Oh, no, where was Joe’s glove? Wait, here it is, now Joe’s going in and I’m on the side of the road, trying to guide him to where I hear the bells and where the receiver says the signal is strongest. 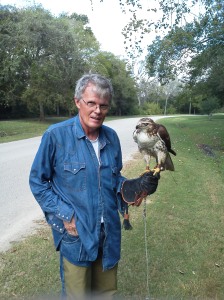 Through sheer willpower Joe overcomes the pain and sweat only Houston thorns can provide in October, but he eventually triumphs! He spies Rocky down in the middle of the thicket, with the carcass of another hawk! Thank goodness for the “Let it Lay” law. But a kill is a kill, even if it will go down as a misc.*, and the feathers wasn’t Rocky! We thought it might”ve been that Coops that was bothering him when we first started out, but neither of us was sure. All we knew was that at the end of it all, Joe and Rocky had a hawk on the fist and a kill in the books, respectively.
So all that just goes to show you that no matter how well you plan ahead, Nature’s always gonna do Her own thing anyway!  It was a nerve-wracking time to be sure (I can only imagine how Joe must have felt!), but it was exciting to not have lost the bird and a great learning experience for all! Thanks for the chance to experience it!
Posted in Falconry | Leave a comment

Why I Want to Raise Quail

Why do I want to raise quail? What an awesome question! You see, these birds are goofy little balls of feathers and poop, so who wouldn’t want to keep them in their homes, right?

But for those that need convincing, I’d like to point out that they are delicious (though some members of my household have decided that any animals we grow, name, or otherwise allow inside our house are no longer food, so this is a moot point for my particular situation) and that their tiny eggs are even more delicious!

Also, if you got a boy in the mix somewhere who is actively making sure at least some of those adorably eggs are fertile, then the cute eggs hatch out even cuter baby quail!!

So in short (I realize saying “in short” in a short post is just flat out silly, but yeah…) cute birds with cute eggs makes Behn happy. Wewt!